I was in San Francisco this week speaking at and attending the TV of Tomorrow Show.  As I typically do, I was scheduled to take the red eye home on Wednesday night.  I had a few hours between the end of the conference and my flight so after grabbing dinner at Anchor and Hope, I walked to AT&T Park to watch a few innings of the Astros @ Giants game before heading to SFO for a 10:43PM flight. I had caught the last few innings on the previous night and thought I’d catch a few more before leaving for DC. My tweet at the time sums it well:

Over the years I’ve been fortunate to have some great memories at AT&T Park.  I lived in San Francisco in 2000 when the stadium first opened as PacBell Park. My wife and I were newly married at the time and we caught a few games over that summer – our first being July 4th, 2000. It was technically the first game she would attend as Mrs. DuBravac.  I saw my first MLB playoff game in AT&T Park when I found myself in San Francisco for business in October 2010.  I went to game 3 of the NLCS where right-hander Matt Cain combined with the bullpen on a three-hitter against the Philadelphia Phillies. The Giants would win game 3 with a score of 3-0 and take a 2-1 lead in the NLCS on their way to winning both the NLCS and the World Series.  Little did I know at the time that Matt Cain would provide another great memory less than two years later.

San Francisco is a great baseball town with a storied franchise and a great fan base. After a beautiful June day in San Francisco it was starting to turn cold as the sun began to set – typical of the City by the Bay.  I bought a ticket a block from the stadium for $15 and grabbed a churro for $2 as a walked through the 2nd Street Gate.  I was in the Park a few minutes before first pitch so as the grounds crew made their final preparations I strolled across the outfield promenade behind the left field bleachers passing Little Giants park, the Coca-Cola bottle and the Giant 1927 Old-Time Four-Fingered Baseball Glove. I continued across the promenade above the Cove and walked up the stairs just past right field to the 300 level where I sat in row 1, seat 22, section 307.

Cain went right to work, striking out the first two batters before Jed Lowrie popped out to Pablo Sandoval in foul territory to end the half inning.  In the bottom of the 1st the Giants struck quickly with a two run shot from Melky Cabrera. In the bottom of the 2nd Brandon Belt would hit a 2nd two-run shot and by the time the Giants were out of the 3rd they were holding a 7-0 lead.  To this point I was focused on offense – not atypical for baseball and by all accounts the Giants had this game in the bag.  I bought some hot chocolate to deal with the San Francisco summer – sending this tweet together with the following picture: 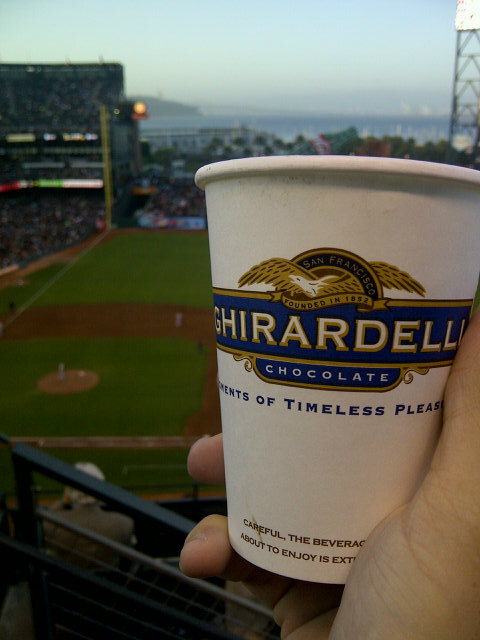 I decided to wander the stadium a bit more and take in some of the other sight lines and in the process watched the Giants add another run in the 4th. I wandered down to section 121 – where I had sat for the final few innings of the game the previous night.  Looking on the right field wall I  saw the number of Ks mounting.  By the middle of the 5th inning Cain had 9 under his belt en route to a personal best 14. When he finally hit 14, it reminded me of another gem I saw live – Stephen Strasburg’s first game with the Nationals where he cut down 14 over 7 innings.

In the bottom of the 5th inning Gregory Blanco would hit a two-run shot over the right field wall extending the Giant’s lead to 10.  I had set 9PM as the time I’d head for the airport and that time was quickly approaching, but something special was unfolding and I wasn’t going to miss it for a flight I’d taken dozens of time.

It was the 6th inning that I first really took notice of the string of zeros across the scoreboard in center field and Melky’s catch in the top half was received by more energy than a similar catch would have had in a game where the home team is sporting a 10-0 lead. To start the top half of the 7th inning, manager Bruce Bochy made several defensive changes to shore-up support behind Cain and at that point everyone knew the historical potential of the night.

Cain would start the 7th inning by working into a full count against Jordan Schafer. Everyone knew the next pitch could seal the fate of the game.  Cain would be forced to pitch him something he could hit.  Schafer would take that 3-2 pitch deep into the center field gap – Triple’s Alley as it is know in San Francisco.  It was with the subsequent catch made by Gregor Blanco that everyone knew Cain was only moments away from perfection.  It was probably the most amazing defensive play I’ve ever witnessed in a live game.  The stadium erupted. You could physically feel the energy level rise and Cain would go on to strike out the rest of the side.  A worthy read on the catch comes from Blaco’s on blog and of course here is the video:

The most poignant moment was when Cain himself tipped his hat to Blanco. At this point, every fan left inside the confines of AT&T Park is completely behind Cain.  He receives a huge standing ovation each time he disappears into the dugout and subsequently each time he reemerges onto the field.  While you typically come to a baseball game hoping for offense, everyone was remaining for defense and there was an unsaid hope that the Giants would be retired quickly in the bottom half of the seven and eighth innings so Cain could return to the bump and resume his path to perfection.

Here is the final box score of the game:

And here is the final pitch of only the 22nd perfect game to be recorded in all the annals of baseball.  A pitch that I’m certain I’ll reflect on each time I walk into a baseball stadium. 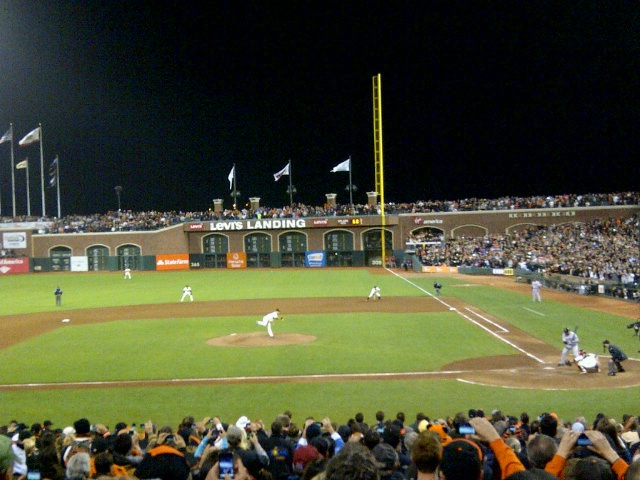