Roughly one in ten workers have filed for unemployment in the last three weeks. Here’s a look at estimated unemployment by state: 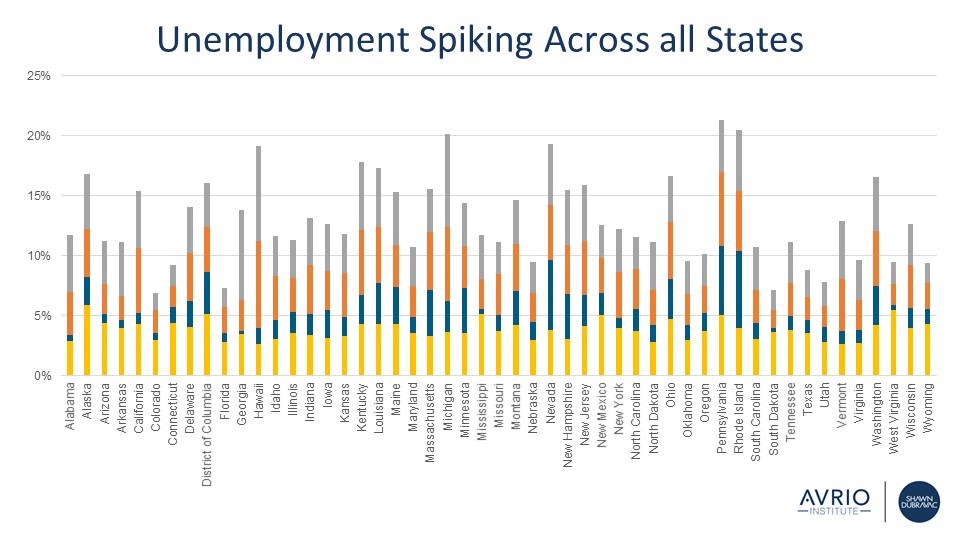 If you add the 16.8 million individuals who have filed for unemployment over the last three weeks to the 7.14 million who were already unemployed, the national unemployment rate jumps to nearly 15 percent.

Yes, there has been some hiring over the last three weeks, but hiring has unlikely not proceeded at the same rate as it was earlier in the year. It is likely also true that many who are eligible for unemployment benefits have not applied. Some of these figures could be our lower bounds.

Over the last two weeks, the Federal Reserve has added over $500B a week to its balance sheet. 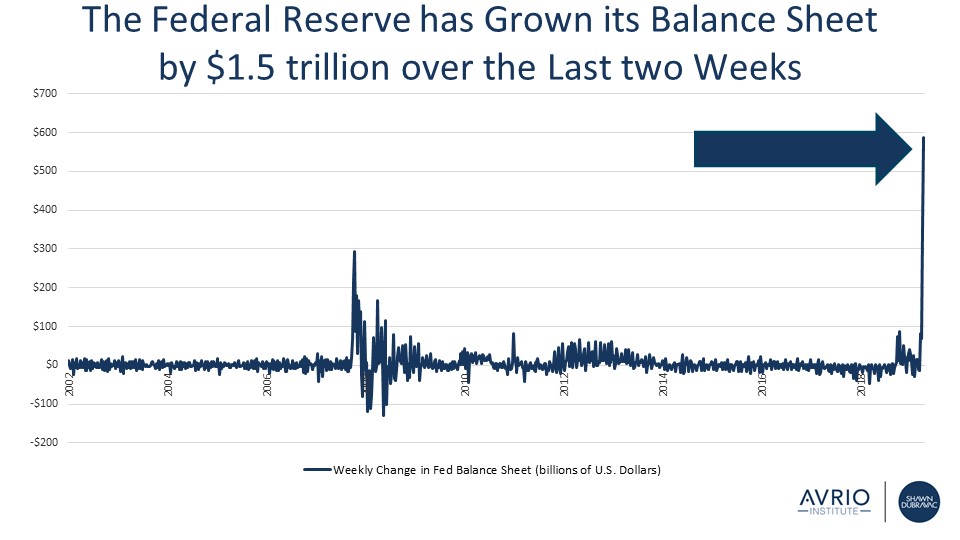 In just the last two weeks, the Fed has increased their holdings of U.S. Treasuries by $700B, mortgage-backed securities (MBS) by $91B, loans by $101B and swaps with foreign central banks by $348B. This doesn’t include another $162B purchased on April 2nd and April 3rd.

The loss of hospitality jobs in March 2020 is unprecedented.

When we have April data in a month, we’ll see the U.S. economy suffered more hospitality job losses in two months than during the entirety of the last recession. 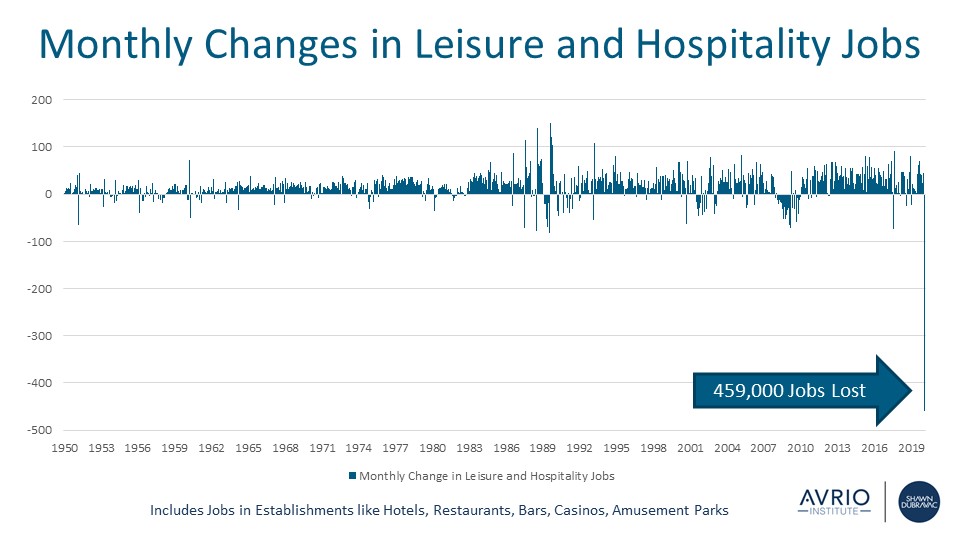 The leisure and hospitality sector includes businesses like hotels, restaurants, bars, casinos, amusements parts, museums. Some 85% of the sector is accommodations and food service (think hotels and restaurants). The sector reported 459,000 fewer jobs in March 2020. The worst monthly change prior to March 2020 was a loss of 83,000 (August 1989). The sector accounted for roughly 66% of the total decline in Nonfarm payroll (701K) during March 2020.

The leisure and hospitality sector shed 623,000 jobs during the Great Recession (Jan 2008-February 2010). That decline happened over two years. The current downturn is bigger and quicker than we have ever seen.

The March 2020 data only include workers who are paid by their employer for all or any part of the pay period including the 12th of the month. So it doesn’t include the destruction we saw in the second half of the month. That will come in April’s data. March is much worse than the data suggests.

Some of these furloughed employees will likely return to payrolls in 90 days. Many will not.

When Nearly Every Astros Game from 2017 is on YouTube 0

As reported in the Wall Street Journal, Tony Adams watched 8,274 pitches thrown to Astros hitters during 58 home games from the 2017 season. He logged his results on signstealingscandal.com. Adams broke down every pitch to Astros hitters, noted if he discerned a bang, and included a direct link to each pitch.

In 2020, Wuhan is expected to account for 6% of worldwide mobile OLED capacity, 3% of mobile LCD capacity and 2% of LCD TV capacity. In 2021, these figures should rise to 9% of mobile OLED capacity and 4% of LCD TV capacity…Since the display industry is still in a period of over-supply, this supply disruption could help further stabilize and increase prices.

Lately I’ve been thinking a lot about where AI fits into corporate strategy and structure. Marc Andreessen recently suggested

…there’s two obvious business models… one is to be a horizontal platform provider [or] infrastructure provider, analogous to the operating system or the database for the cloud. The other opportunity is in the verticals, the applications of AI.

…AI is a platform and an architecture, in the same sense that the mainframe was architecture, the mini computer was an architecture, the PC, the internet, the cloud, have been architectures. We think there are very good odds that AI is the next one of those. When there’s an architecture shift in our business…everything above the architecture gets rebuilt from scratch. Because the fundamental assumptions about what you’re building change. You’re no longer building a website, you’re no longer building a mobile app, you’re no longer building any of those things, you’re building instead an AI engine that is, in the ideal case, giving you the answer to whatever the question is. And if that’s the case, then basically all applications will change. Along with that all infrastructure will change. Basically, the entire industry will turn over again, the same way that it did with the internet, and the same way it did with mobile and cloud. And so if that’s the case, then it’s just it’s going to be like an absolute explosive period of growth for this entire industry.

I see AI as much more transformational. I see AI reframing the underlying service. In this way, AI creates new services. Entirely different services and experiences than what was previously being offered.

The Bureau of Industry and Security (BIS) issued an interim final rule that imposes a license requirement for the export and reexport of software specially designed to automate the analysis of geospatial imagery. The rule applies to exports and reexports to all countries beyond Canada.

The rule is scheduled to be published on Monday January 6, 2020. But you can read the unpublished rule here. 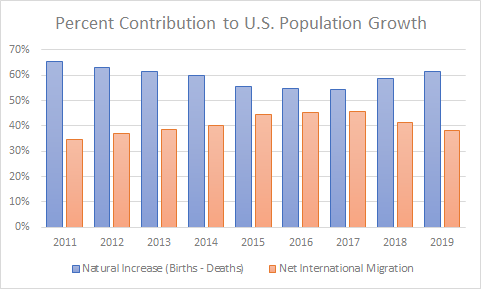 While technological shifts will help shape the future of work, demographic shifts will also define not only what work is, but where to find it. Population growth is slowing at the same time that  domestic migration or internal migration (movement between states) is slowing to record low levels. These are some of the demographic trends playing out as the digital economy rolls forward. These trends will interact in interesting ways in the coming years. 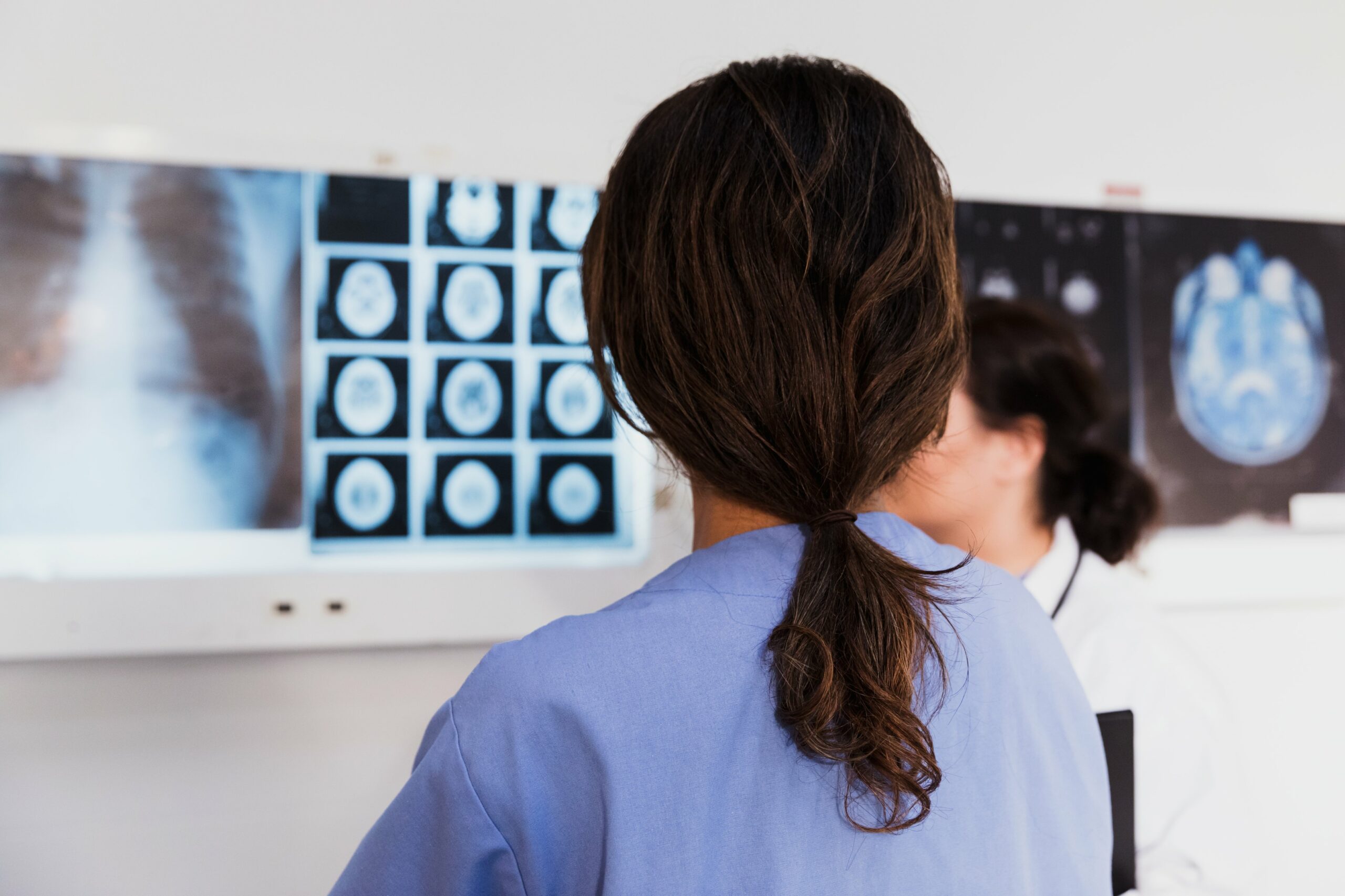 Breast cancer is the most common cancer in women worldwide. Early detection and treatment can lower mortality rates. But clinicians still fail to identify breast cancer about 20 percent of the time (false-negative results). Clinicians also identify cancer, when there is no breast cancer present (false-positive results). Studies suggest 7-12 percent of women will receive false positive results after one mammogram and after 10 years of annual screening, more than half of women will receive at least one false-positive recall.

False-negative results provide a false sense of security and could ultimately hinder treatment effectiveness. False-positive results can cause anxiety and lead to unnecessary tests and procedures. Another hurdle in identifying breast cancer is a shortage of radiologists needed to read mammograms.

Researchers have developed an AI system that surpasses human experts in breast cancer identification. Their study results were recently published in the journal Nature.

We show an absolute reduction of 5.7% and 1.2% (USA and UK) in false positives and 9.4% and 2.7% in false negatives. We provide evidence of the ability of the system to generalize from the UK to the USA. In an independent study of six radiologists, the AI system outperformed all of the human readers…We ran a simulation in which the AI system participated in the double-reading process that is used in the UK, and found that the AI system maintained non-inferior performance and reduced the workload of the second reader by 88%.

The study results are promising. The AI system outperformed six radiologists and also lowered missed cancer diagnoses on the U.S. sample by 9 percent and mistaken readings of breast cancer by 6 percent. It also produced results across populations, something many AI systems have yet to produce. The researchers didn’t go as far as to suggest their AI system would replace humans.

The optimal use of the AI system within clinical workflows remains to be determined. The specificity advantage exhibited by the system suggests that it could help to reduce recall rates and unnecessary biopsies. The improvement in sensitivity exhibited in the US data shows that the AI system may be capable of detecting cancers earlier than the standard of care. An analysis of the localization performance of the AI system suggests it holds early promise for flagging suspicious regions for review by experts.

Beyond improving reader performance, the technology described here may have a number of other clinical applications. Through simulation, we suggest how the system could obviate the need for double reading in 88% of UK screening cases, while maintaining a similar level of accuracy to the standard protocol. We also explore how high-confidence operating points can be used to triage high-risk cases and dismiss low-risk cases. These analyses highlight the potential of this technology to deliver screening results in a sustainable manner despite workforce shortages in countries such as the UK.

At the same time, it becomes more difficult to make the case for approaches that are exclusively human. It is hard to imagine patients, insurance companies, and others won’t demand AI systems augment what humans are doing. This is especially true in healthcare. But will also likely become increasingly true in other domains. What tasks would you want humans to do alone if you know that you can get better results (greater accuracy, faster, etc) when human capability is augmented with AI systems.

Humans will need to learn how to incorporate these type of AI systems into their workflow. The next big step for AI seems to be “operationalizing AI.” This is likely a decade in the works, but slowly you will see individuals figuring how to best work within environments that are being redefined by AI systems.