Retail News Around the Horn 0

A few thoughts on retail:

Black Friday has Moved to Thursday:  As I predicted last year, stores are opening earlier for Black Friday this year.  ToysRUs jumped the gun in 2010 and opened at 10PM on Thursday.  Each ToysRUs store landed 1,000+ shoppers – the largest crowds of any retailer largely because there was nothing else open.  I predicted then that stores would open earlier and that is exactly what is happening.  Target was one of the first to announce that they would open at Midnight (and are even opening some Denver-area stores on Thanksgiving). Macy’s, BestBuy and others have subsequently announced they’ll also open at Midnight. Beyond store openings, I’ve been saying for awhile that online shopping will set new records on Thursday. A recent survey from Accenture suggests in-store traffic could be the lowest in 3 years.  ShopperTrak is also forecasting store traffic will be down this year.

The Rise of Social: the use of social networking sites by retailers isn’t new, but their use heading into the 2011 holiday season is

pronounced. Walmart, HHgregg, and others are pushing consumers to their Facebook page for early Black Friday deals and promises of the first glimpses of their actual Black Friday offerings. ToysRUs released their annual holiday catalog early to followers on Facebook.

Daily/Timed Deals: We’re all familiar with the rise of daily deal sites like LivingSocial and recently public Groupon.  This holiday season traditional retailers are increasingly offering daily or timed deals. Amazon offered a variety of deals in and around Black Friday last year and is already offering limited and timed “lightening deals” again this year on their Black Friday site amazon.com/blackfriday. This year, retailers like Sam’s Club, Walmart, and others are offering daily deals/offers.

The Use of Mobile: The use of mobile will be more pronounced than ever this holiday season.  The increase in smartphone/tablet ownership together with Thanksgiving turning into a big day for online retail will have mobile e-commerce setting giant records.  Sam’s Club and others are using mobile apps. ToysRUs is adding QR codes to their annual holiday catalog driving customers to additional content

LayAway:  The jury is still out if lay away will be a big driver, but Walmart has brought it back after ending the practice in 2008. Their focus is on tech and toys.  ToysRUs and others are also offering lay away options.

Price Guarantee: Last month Walmart announced they would match lower advertised prices for any purchases made between November 1 and December 25th.  Notably, they’ll match the price by providing the difference in the form of a Walmart giftcard.

Consumer Tech: ToysRUs is making a stronger push into consumer electronics (more on their assortment at CEPro). Tech is the new Toy kids most want. A different sign that games are changing for kids – GameStop is entering the tablet business.

Lower Inventories this Year Might Suggest Fewer Deals: Inventories remain well managed, even perhaps thin headed into the final months of the year. That might suggest fewer bargains to be had.  Read more in the WSJ.
Finally, an infograph on holiday spending:

A decent list of 15 Black Friday myths can be found here.

Some are predicting store traffic will fall (again) this year.

Earlier this week, the New York Times reported on a study by Forrester.  The key finding: “Even though just 9 percent of shoppers own tablets, sales from tablets already account for 20 percent of mobile e-commerce sales and 60 percent of tablet owners have used them to shop.”  Certainly tablets are set to have a disruptive impact on a variety of services and devices, but it is important to frame “mobile” in the correct light.

The term “mobile” is being thrown around too loosely.  Mobility is a relative term, but it is frequently being used in the absolute sense.  There are several device attributes that influence the degree to which a device/experience is mobile. These include device size, power or battery life, and availability of content. Size and batter life are self explanatory. The smaller a device the higher degree of mobility it affords users.  This of course assumes some constant level of usability.  One could easily imagine a device so small it isn’t useful to the end user. In this way, size could have asymptotic characteristics.  Size influence on the device’s degree of mobility can also be general (applied to the entire size of the device) or it can be specific to an attribute of the device like screen size, antenna, etc. For power and battery life, the great the longevity of power the greater the degree of mobility provided by the device.  Power longevity also doesn’t necessarily mean battery life. The in-vehicle experience readily provides 12V power to devices used in and around vehicles, but these are still mobile devices in the general sense for which we are using it here.

The degree of mobility a device provides is also a function of the content it provides the end user.  This content can take many forms and can be delivered in many ways.  Content includes video (ie Portable DVD players) and audio (ie portable tape players to MP3 players).  It could include maps (ie GPS) or other information (ie data available on the Internet).  It can be delivered to the device physically (ie tapes, CDs, DVDs) or digitally.  Content delivery influence on mobility is also a function of time.  It can be delivered before the device moves into a “mobile” state – this is generally the case with devices requiring physical media.  But content is of course increasingly being delivered while the device is in a mobile setting using spectrum.  This use to be only really applicable to radio and some TV, but is increasingly applicable to all forms of content. The greater the access to content, the greater degree of mobility the device can provide.

At the end of the month, Toys“R”Us will begin selling Amazon’s Kindle (see Retailing Today, Mashable, Reuters, LA Times). This is a natural extention of its existing non-Amazon retail strategy (which already includes Target, Best Buy, RadioShack and AT&T stores). More importantly, I think it targets an important segment of the population primed for an e-reader experience but who haven’t had the chance to express that interest.

Let’s start first with RadioShack.  Despite poor results, the stock was up big on the news – closing up nearly 20 percent.  Clearly the markets think this is a positive move.

When eReaders grow-up to be Tablets 0 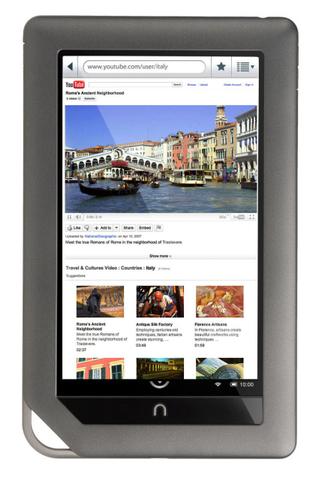 What happens when eReaders grow up to be tablets? This morphing is already well underway. Barnes & Noble has always referred to the Color Nook as a tablet eReader – with tablet being the operative word. At their event this week. B&N claimed the Color Nook is the top selling android tablet in the market. Amazon – the current king in e-ink eReaders – is getting set to launch potentially two new tablet-oriented devices.  E-ink is actively working to bring to market color e-ink screens and other eReader players are treading towards tablet-like devices.  But this evolution has important implications.

First, network economics for text are very different than they are for video and more data-intensive applications. One of Kindle’s opening hallmark features was the ability of the user to download books via the cellular connection without having to independently contract with the service provider.  In fact, at one point Amazon switched Kindle cellular service from Sprint to ATT and users never took notice.

This won’t be the case as users gain access to more data-intensive offerings. These services are more bandwidth intensive (and therefore costly) than delivering text over the network.  Even though our research has constantly shown most tablet users primarily connect via Wi-Fi, the existing service contracts can’t work when devices are more than books. This will be a key element in the new tablets being launched by Amazon.

App usage on apps-enabled devices will crowd out book usage.  This has ramifications for device pricing.  In the early days of Kindle, Amazon subsidized the content instead of the hardware. This changed as Apple moved into the book business and subsequently eReader OEMs began selling ebooks at the publisher price and subsidized the hardware prices (or atleast began selling them at very low margin).  If the margin is made on the ebooks and their are less ebooks sold as a result of changing use-case scenarios – OEMs will be in search of a new business model to driven margin.

This week Barnes & Noble upgraded the software running on their Nook Color e-reader tablets. Users can now access apps, have email pushed to the device and watch flash videos.

There are a variety of reviews on the web (see: here, here, and here) discussing the anticipated update so here I’ll take a differ tack and discuss two things: what we learn about the evolution of technology in the Nook and what it means for adjacent categories like tablet computers (as opposed to tablet e-readers).

While their initial foray into personal electronics with the original nook might have been more than just an experiment, B&N moved relatively quickly onto the Nook Color. The original Nook was launched in November 2009 and while it was largely sold out during that introductory holiday season, there was likely very little opening stock available. By June 2010 the price had been cut consistent with pricing cuts across the entire e-reader category. Within a year of the initial Nook launch, B&N had a higher-end, full color screen e-ereader tablet and the Nook line collectively was “the company’s biggest bestseller ever in its nearly 40-year history.”

The following was published in Dealerscope Magazine in December 2010:

The last three years have been a volatile period in the history of consumer electronics. While a recovery is slowly taking shape, I believe the next few years will offer as much change as the in the last year or so. Here are a few trends worth watching:

Store-within-a-Store Model Expands
In the late 1990s, Apple’s presence within major retailers began to change, ultimately transforming into the now familiar store-within-a-store model. This gradual transformation pulled Apple products together within the store. Instead of merchandizing Apple products within the category where the products would sit next to similar devices, Apple products were increasingly merchandized next to other Apple products. The retail presence for Apple changed from an existence within categories to one of brand. As the Apple ecosystem of products expanded, so too did Apple’s store-within-a-store presence.    While this trend has yet to catch-on widely within the U.S., it is starting to emerge outside of the U.S. for other brands. We’ll see this trend accelerate in the U.S. and beyond.

To create a 360-degree experience (a combination of hardware, software and ecosystem) for consumers, companies are highlighting how the interoperability of their different devices can provide a seamless experience for the end-user. The store-within-a-store model is also expanding slowly as the more traditional categorical view recedes. When devices move away from conventional category definitions, brand becomes the natural organizational default.

BestBuy is apparently holding iPad supply so they will presumably have enough supply on stock and in the stores for an “upcoming event.” This highlights the delicate nature of retailing today.  Physical media is no longer the traffic driver it once was, but today’s traffic drivers aren’t providing the margin that retailers need so events have become the focus to drive traffic (think Black Friday, CyberMonday, etc). More to follow on this topic.